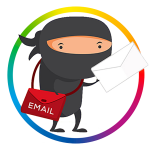 I’ve had some feedback over the years that it’s helpful (or at least amusing) to you guys to hear about when I screw up — if for no other reason than to rest assured that mistakes don’t stop you from being a Ninja. 🥷🏼

I’m in the process of completely automating list hygiene. As in, NO human intervention whatsoever—automatically targeting who’s not engaged anymore, starting them on a re-engage sequence, moving them out of that sequence if they re-engage, and unsubscribing them if they don’t.

I already had three of the four working pretty well anyway. The first one, though — that was a BITCH. I finally have it figured out in ActiveCampaign. 🎉

Except not really, because here are the parts I messed up, LOL:

1. I built a time delay in right at the beginning, because I wanted to spot-check the people who entered the sequence and make sure they really belonged there. Gotta make these things fool-proof! You can’t just deploy all willy-nilly on a live list! Except… during that time delay, quite a few people opened a regular campaign, because —

2. I forgot to exclude people in the re-engage sequence from regular campaigns. And that’s actually fine, that could even be an intentional choice, but if you do it that way, you have to build it so that they’ll get pulled out of the re-engage sequence if they open any email, not just the re-engage email. 🤦🏼‍♀️  I did not build this (or even consider that it would be an issue), so these people who had re-engaged outside of the sequence then got an email saying “you haven’t been engaging with my emails lately.” *sigh*

3. I forgot — just plain smooth-brain-style forgot — to exclude people in lists other than the main Ninja list, so —

4. Re-engage emails went out to people who had taken my mini-course but were not on my main list, even though they literally had nothing to engage with and I had promised them I would never use that list for anything other than updates to the mini-course. 😬  Fortunately, the vast majority of them predate my automated engagement tracker, so they were not targeted. But also —

5. Not every subscriber in my ActiveCampaign account is a Newsletter Ninja subscriber, so re-engage emails FROM NEWSLETTER NINJA went out to some people on my pen names’ lists and MY CLIENTS’ LISTS. (please kill me to death ❤️🗡) I’m very lucky that 99% of my client base has their own list on AC/ML/wherever, but for just a few clients I host their lists in my AC account and … well. I’ve been eating a lot of humble pie this past week, friends.

6. I just plain forgot to tag them anywhere in the sequence other than if they failed to reengage, and I did not build my customary catch baskets at the end of the automation branches. I’m very lucky that I realized early on that things were going to shit; I was able to stop them all at their current wait points, and will go in and figure them out one-by-one. ONE-BY-ONE. In all this free time I have! And then I will have to either: send them along in the sequence, remove them from the sequence because they’ve re-engaged, or send a deeply apologetic email to people who have never even heard of me but got an email asking why they weren’t opening my emails. (Oh, and one of the people I have to email is my ex-husband, because he’s on my daughter’s list. 😂 This will definitely fix that problem where he doesn’t take my “job” seriously.)

And I actually think there should be one more item on this list, and I’ve forgotten what it is. So that’ll be fun when I’m in there trying to fix it, all the while plagued by a nagging feeling that I’ve forgotten something important.

Despite the gross incompetence outlined above, I’m usually really good at this stuff. (I’m just always hurrying and I’m always so tired 😭 — plus I really want to get this figured out so I can port it to Mailerlite and be recognized for my genius.)

So yeah. Never feel bad when you mess up. Even Ninjas mess up all the time.